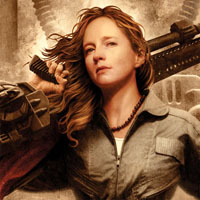 I’ve been lax in my reading, as I tend to be at times. I did do a quick turnaround on Star Wars books for an early review of Martha Wells’ Razor’s Edge, which was fine. Not spectacular, but fine.

My detox read was The Creative Fire by Brenda Cooper, which I am of mixed minds about. It’s sci-fi on a generation ship and blatantly inspired by Eva Peron and Evita. They come right out and tell you. As someone who was raised on Andrew Lloyd Webber, that’s really what made me pick it up, but I wonder if that set the bar a bit too high. (Despite all the misogynistic issues Evita has…) But the book itself is very by-the-numbers, and while Ruby says she’s smart and ambitious (and she says it a lot) I don’t really get that feel from the character: She never seems to move beyond being a pawn. And while it might not be the driving force behind her rise, there’s a missed opportunity here for Ruby to advance herself without having to sleep with powerful men – despite the character’s denials.

The book read like overly obvious YA, even though it’s clearly not marketed as YA. I’m a little torn about reading the sequel which comes out next month, because I’m somewhat curious to see if Ruby does less telling and more actual showing. On the plus side, it did keep me interested enough to knock it out in a couple of days.